How much do electric cars cost?

Buying a car is one of the bigger purchases you will make, and electric vehicles (EVs) are no different. While the upfront prices for electric vehicles tend to be higher than prices for conventional gas-powered cars, the fuel and maintenance savings over an EV’s lifetime will more than offset the higher initial price.

As a car shopper in the market for an electric vehicle, you likely want to know the out-of-pocket price for your new car. Below, you can find the base prices for four of the most popular electric vehicles available today, as listed on the manufacturers’ websites.

One important note to remember is that the above prices are taken after the federal tax credit for electric vehicles was factored in. There are also many state and local tax credits that will bring down prices further. You can use the Alternative Fuels Data Center to search for incentives from utilities and private organizations, as well as states.

Comparing the price of your EV of choice to a similar gas-powered car is the best way to understand electric vehicle costs. In the chart below, we’ve selected conventional vehicles with similar luxury and performance ratings to popular electric cars for a price comparison. 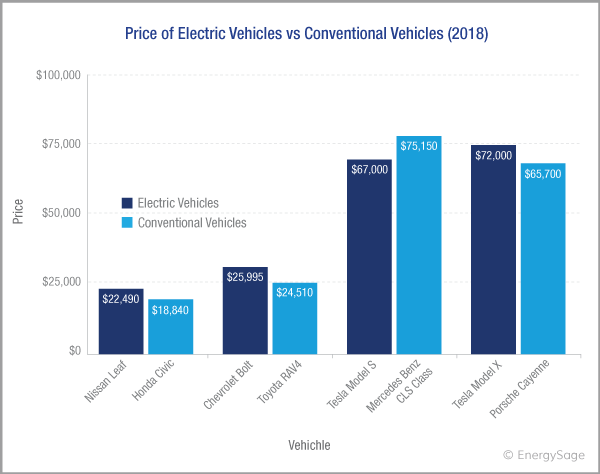 In general, gas-powered cars are slightly less expensive than electric cars up front. For example, the country’s most popular electric vehicle, the Nissan Leaf, is about $4,000 more after the electric car tax credit than the Honda Civic, one of the country’s most widely used compact cars. The exception to this trend is in the Tesla Model S vs. the Mercedes Benz CLS Class, which is a factor of the unusually high ratings of Tesla’s luxury sedan.

Because the upfront prices of comparable electric and gas vehicles are in the same ballpark, it won’t take long for an EV to begin saving you money. Reduced fuel costs will lead to immediate day-to-day savings on your car, and before you know it you will have saved enough money to cover the increased sticker price of your electric vehicle.

Additionally, lower maintenance costs for EVs will save you money. This is due to the parts in a standard combustion engine that need to be replaced regularly, which don't exist in an electric vehicle. For example, engine oil, spark plugs, and timing belts are all commonly damaged or replaced components in combustion vehicle engines that aren’t in an electric car motor. Paying to replace parts like these adds up over time, leading to even more savings when you choose an EV.

The up front pricing differences between EVs and plug-in hybrid vehicles (PHEVs) aren’t as clear as those between EVs and conventional vehicles. Because there are so many new options for PHEVs becoming available each year, picking one car to compare to a similar EV is not necessarily representative of market trends as a whole. For the sake of consistent comparison, only plug-in hybrids were used to compare to electric vehicles.

*Prices for plug-in hybrids include a federal tax credit between $4,000 and $7,500, depending on vehicle model

However, one concrete note to remember is that while some cases may see PHEVs costing less upfront, an electric vehicle will almost always save you more money in the long run. Even rare trips to the gas station in a PHEV will add up, and EV owners never have to worry about paying for expensive gasoline again.

Furthermore, just like standard cars, PHEVs have higher maintenance costs than EVs due to the additional parts in their combustion engines. Plug-in hybrids still have engine oil and spark plugs that need to be replaced regularly, and those costs don’t exist for an EV owner.