Costs and benefits of electric cars vs. conventional vehicles 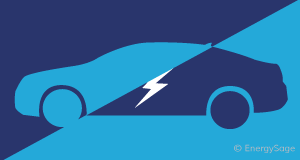 Regardless of the type of vehicle you are looking to purchase, there are several costs associated with car ownership. Choosing an EV over a conventional, internal combustion engine (ICE) vehicle can result in significant long-term savings. If you are considering purchasing a new car and are also looking at an electric vehicle as a serious option, it is important to understand where your costs will come from, and how an electric vehicle can lead to different sources of spending and saving when compared to conventional ICEs.

An immediately apparent difference between EVs and ICEs is their fuel source, and consequently what you as a consumer use to power your vehicle. ICEs run on gasoline is burned internally to power the car, while EVs run on electricity. Electricity can come from many sources, including from the burning of coal or gas, or from renewable sources such as solar, wind, and hydropower.

A 2018 study from the University of Michigan's Transportation Research Institute found that electric vehicles cost less than half as much to operate as gas-powered cars. The average cost to operate an EV in the United States is $485 per year, while the average for a gasoline-powered vehicle is $1,117.

The exact price difference depends on gas and electric rates where you live, plus the type of car you drive. Depending on your vehicle’s fuel efficiency rating, the money you spend to fill up your gas tank will translate to varying travel ranges. “Fuel-efficient” conventional cars are designed to maximize their miles per gallon (mpg) rating, thus costing the least amount of money per mile travelled. A car rated at 30 mpg will cost less money in fuel over time than a car rated at 20 mpg.

The cost to run an electric vehicle is slightly more complicated. Although you don’t pay a gas pump-type fee every time you charge your EV battery, the electricity being used to charge your battery counts towards your home electric bill. You can directly compare electricity and gas costs when running an electric car vs. a conventional gas-powered car with the Department of Energy’s eGallon tool. This calculator is updated regularly, and compares the cost of driving a mile on gasoline vs. a mile on electricity, depending on where you live and energy prices at the time. Generally, the cost of electricity is decreasing in price, as renewable power generation costs fall lower and lower with advancements in technology and policy.

The fuel used to power your car is only one factor in the cost of car ownership. In particular, vehicle maintenance costs can stack up over time. With ICEs, engine maintenance can be a huge money sink, especially as cars age. Changing the engine oil, coolant, transmission fluid, and belts can add up in value over time. By comparison, electric cars don’t have internal combustion engines, so these costs disappear. Universal vehicle expenses like tire and brake changes, insurance, and structural repair are part of owning any vehicle, but EV owners avoid many of the repeated costs associated with combustion engine upkeep.

EVs aren’t without expenses, however. The largest possible maintenance expense for an electric vehicle is a replacement battery pack. Unlike a conventional battery, EVs have large, complex rechargeable batteries that are drained and recharged constantly, which leads to degradation and range loss over time. In the rare case that your EV battery is defective and needs replacement, manufacturers will often cover that replacement with a battery warranty. However, if your car is not under warranty, replacing your EV battery is an expensive bill. The vast majority of EV owners won’t have to replace their car’s battery, but it is a risk you run when operating an electric car.

The availability of incentives for buying electric vehicles, coupled with their continuously falling costs, has made an investment in an EV a smart energy and money decision. Electric vehicles are not for every lifestyle, but when compared to the myriad costs surrounding ICE purchase and maintenance, choosing an EV can be an intelligent fiscal decision.

How much does a Tesla cost?